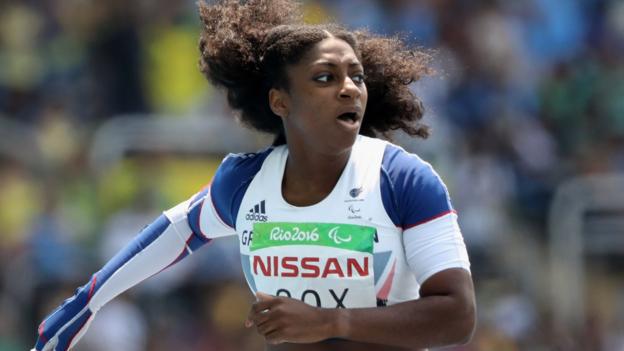 Paralympic champion Kadeena Cox has had her UK Sport funding suspended while she takes part in Channel 4 winter sports programme The Jump.
Cox, 25, will join Olympic taekwondo champion Jade Jones and Rio silver medal-winning gymnast Louis Smith on the show.
She won cycling and athletics golds at the Rio Paralympics.
British Athletics made the decision to withdraw Cox’s funding with the support of British Cycling.
UK Sport told BBC Sport the participation of funded athletes in the show was a matter for the individual sports concerned.
Cox, who has multiple sclerosis after a stroke in May 2014, does not have a major cycling event this year, with no Para-cycling Track World Championships officially confirmed, but she would be expected to take part in the Para Athletics World Championships in London in July.
“Due to the nature of the activities on the show, the athlete cannot continue to be supported by the WCPP (World Class Performance Programme) during this time,” said a statement from British Athletics.
“Her UK Sport funding will be suspended until she returns to training and proves her fitness. ”
The medical teams from both sporting organisations are believed to have advised Cox against participating in the show but have allowed her to make her own decision.
“Kadeena enjoyed a fantastic 2016, making history by winning Paralympic gold in both athletics and cycling, and we respect her decision to take some time away from the sport to pursue the opportunities that her success has afforded her,” added British Cycling.
Both organisations wished Cox well and said they look forward to her return after the show.
On Tuesday, GB Taekwondo said they “had reservations” but “understood” Jones’ decision to take part and had held “extensive” talks with the 23-year-old about the risks involved.
Jones will still receive her full UK Sport funding during her time on the programme.
The show, which sees celebrities competing at winter sports, including ski-jumping, bobsleigh and speed skating, has seen a number of serious injuries.
Last year, Olympic gymnast Beth Tweddle needed surgery to have fractured vertebrae fused together after she was injured in training, while double gold medal-winning swimmer Rebecca Adlington suffered a shoulder injury.
Former Holby City actress Tina Hobley sustained knee, shoulder and arm injuries and has only recently stopped using crutches and Made In Chelsea star Mark-Francis Vandelli broke his ankle.
In addition, athlete Linford Christie pulled a hamstring, ex-EastEnders actor Joe Swash chipped a bone in his shoulder, Girls Aloud star Sarah Harding injured a ligament and model Heather Mills hurt her knee and thumb.
Channel 4 says there has been a “thorough review of safety procedures” before this year’s series.
Football and Other Activities
Football and Other Activities