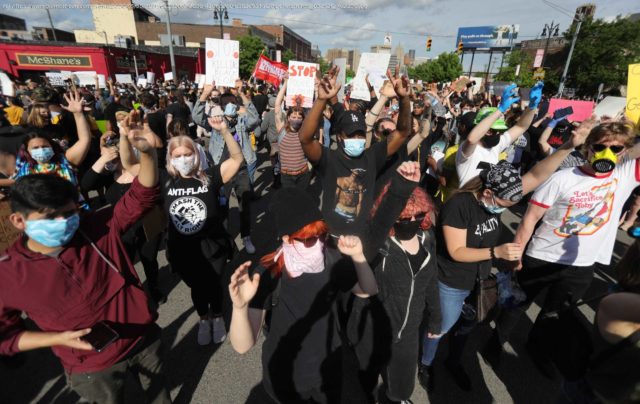 This story is being updated as new information becomes available.
UPDATE 10 p.m.: Police and protesters have clashed near the river walk in Detroit. …
This story is being updated as new information becomes available.
UPDATE 10 p.m.: Police and protesters have clashed near the river walk in Detroit.
About 100 or more protesters were surrounded by police near the river walk minutes before police with shields came in contact with the protesters.
Protesters could be seen throwing items as police moved forward. Video from an on-the-ground reporter then showed protesters carrying a type of post and police going into the crowd amid screams.
—
A growing number of protesters were marching and rallying against police brutality Friday afternoon in Detroit, following the death of George Floyd in Minnesota.
The protest remained peaceful for several hours. Police handed out masks at the start. Shortly before 6 p.m., some interactions between police and protesters took a turn. Shortly before 10 p.m., police and protesters clashed.
Earlier in the evening, protesters could be seen circling a police vehicle waving middle fingers and shouting, “F— the police,” and police also arrested a man for unknown reasons in the area of Michigan Avenue and Rosa Parks Boulevard.
Protesters prevented the police car with the arrested individuals from leaving, police responded on horseback to move them away and then some individuals could be seen pulling on the reins. Two damaged police cars with missing windows were also visible.
Elsewhere at Woodward Avenue and Martin Luther King Jr. Boulevard, no such interactions were visible. There were chants of “Whose streets? Our streets.”
A Facebook event for a march and rally showed at least 1,000 people were marked as attending at 4 p.m. in front of Detroit Public Safety Headquarters,1301 Third St.
By 3:50 p.m., a crowd of at least 100 people had already gathered and started to chant, “No justice, no peace, no racist police.” An hour and a half later, the group had grown to an estimated thousand or more and were marching through the city.
The gathering comes after the death of 46-year-old Floyd, a black man, who died after a white police officer knelt on his neck during an arrest Monday in Minneapolis. A viral video showed Floyd saying, “I can’t breathe” as passersby pleaded for police to stop.
The event in Detroit is in response to Floyd’s death as well as a video showing a Washtenaw County Sheriff’s Office deputy punching a woman – Sha’Teina Grady El – during an encounter this week, according to a press release from protest organizers Metro-Detroit Political Action Network. March for Black Women Detroit, Michigan Progressive Caucus and Detroit Anarchist Black Cross also organized the event.
“Police brutality is an unaccountable epidemic and its time people took a stand,” organizers said, according to the release.
The group and marchers also pointed to injustices with water shutoffs, foreclosures and poverty. They called for the march to be nonviolent and for social distancing amid the novel coronavirus pandemic. Most attendees wore masks.
Detroit City Council President Pro Tem Mary Sheffield led a chant of “I’m fed up,” shortly after the rally began.
“The way in which this country values black lives is unacceptable,” she said. “And to be honest with you, I’m tired. I’m tired of rallying.