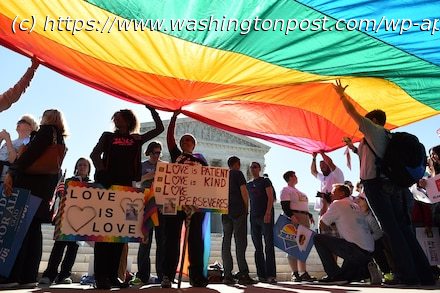 A bipartisan group of 61 senators, including 12 Republicans, voted for the measure.
Twenty-six years ago, the U.S. Senate voted overwhelmingly for the Defense of Marriage Act, a law broadly supported by the American public that defined marriage as the union between a man and a woman.
Republicans had found a wedge issue they would use for more than a decade to divide Democrats between their liberal base and swing voters. Eight years later, then-President George W. Bush embraced “protection of marriage” as a central focus of his successful 2004 reelection effort. “The voice of the people must be heard,” he said upon proposing a constitutional amendment to keep marriage between opposite-sex couples.
While cultural divides continue to animate politics, marriage long ago faded from being a defining social debate. Former president Donald Trump issued conflicting statements on his support for same-sex marriage during his campaigns. The Republican Party now openly celebrates Pride Month and courts LGBTQ voters. Socially conservative activists have moved on to other fights, like the debates over transgender student-athletes. Religious institutions such as the Church of Jesus Christ of Latter-day Saints supported the religious liberty provisions in the bill that passed the Senate on Tuesday.
But the success of same-sex marriage advocates has not ended the fight for greater legal protections for LGBTQ people, who have been subjected to a surge of threats and violence in recent years. Debates about how schools should teach gender and sexual orientation became a hot-button issue in the midterm elections, as has a debate over whether transgender women should be able to compete in women’s sports. Democratic efforts to pass the Equality Act, which would provide nondiscrimination protections to LGBTQ people, have yet to garner significant Republican support.
Barbara Simon, a senior director at the Gay and Lesbian Alliance Against Defamation (GLAAD), said she is particularly worried about a “steady drumbeat of disinformation” targeting LGBTQ communities and individuals, such as the false accusations that LGBTQ people and their allies are “grooming” children.
Yet Tuesday was largely a celebratory day for advocates of protecting same-sex marriage. Senate Majority Leader Charles E. Schumer (D-N.Y.), who as a congressman supported the 1996 law that barred same-sex marriage, said his first call after the bill passed Tuesday would be to his daughter, who is expecting a child with her same-sex spouse in the new year.
“Today, a new day has come for them,” Schumer said. He added that his grandchild would “grow up in a more accepting, inclusive and loving world.”
Such unequivocal positions from leading politicians, including Democrats, were long seen as politically untenable.