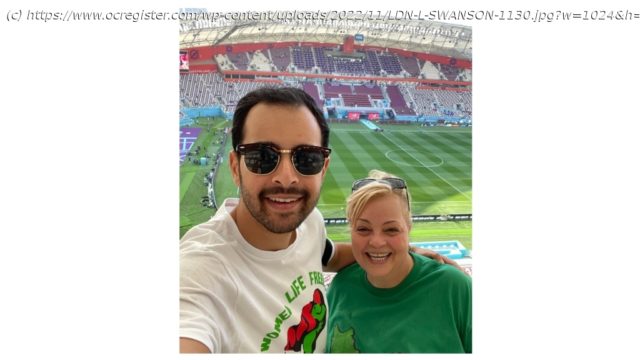 While La Cañada Flintridge’s Quemars Ahmed was with his Iranian-born mom in Qatar, their hearts were with the Iranian people, but their cheers were for the U.S. players on the pitch.
Picking a side in a Lakers-Celtics game? Easy. Root for the good guys, as geography determines it.
Dodgers-Giants? Same.
Iran-United States? That’s more complicated for families like Quemars Ahmed’s.
Iran-England? Even that was fraught during this World Cup.
Ahmed, 30, is a lawyer from La Cañada Flintridge who was heading home after having spent 10 days in Qatar with his mother, Katia, a Pasadena Unified School District wellness coordinator who emigrated from Iran 34 years ago following the revolution there.
I met Quemars in 2017, for a profile when he became the first Muslim to serve as editor-in-chief of the UCLA Law Review – shortly after President Trump signed an executive order banning travel to the United States from seven predominantly Muslim countries, including Iran.
He’s one of those people who’s way smarter than me but also kind enough not to make me feel dumb. A politically minded sports junkie who worked on Elizabeth Warren’s presidential campaign and put up a valiant effort as a 2020 Jeopardy contestant.
When I realized he was in Qatar to see the world’s greatest tournament in person, I wanted to hear from him: Who would he be rooting for when Iran and the United States met in a high-stakes match to determine who would advance out of Group B and into the Round of 16?
Moreover, how were the anti-regime protests raging in Iran affecting his feelings about that country’s soccer team?
First of all, in a head-to-head matchup, Quemars is always rooting for the USA. Even back in 2000, when Iran and the United States met at the Rose Bowl, he was the only member of his family rooting for the home team.
“A far cry from today’s game,” Ahmed said by phone Tuesday from Doha.
That’s because, this time, his mom was also among the ardent American supporters at an electric Al-Thumama Stadium.
Rocking red, white and blue, Katia and Quemars remained on their feet for the duration of the Americans’ 1-0 victory, thrilled to witness the United States earn a spot in the knockout round against the Netherlands on Saturday.
And hopeful, in Katia’s case, that attention now can be trained fully on the uprising in Iran.
Protests have continued since 22-year-old Mahsa Amini died in police custody in September, after she was arrested by Iran’s so-called guidance patrol for how she was wearing her hijab, an incident that sparked an ongoing push for the overthrow of Iran’s theocracy.