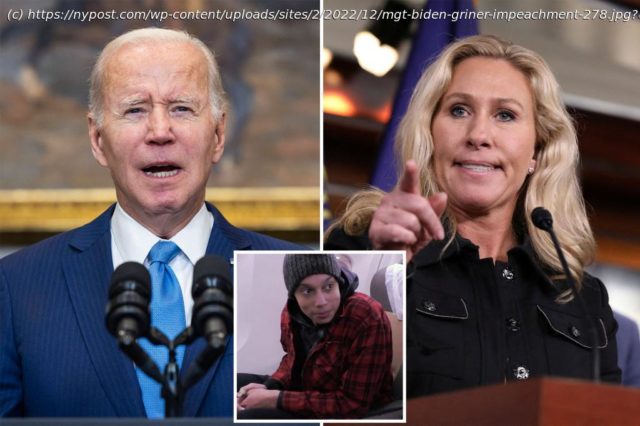 Array
Republican firebrand Rep. Marjorie Taylor Greene called for President Biden to be impeached on Thursday for the prisoner swap that led to the release of WNBA star Brittney Griner from a Russian penal colony.
“Another reason to impeach Biden,” the Georgia lawmaker wrote in a tweet. “The President of the United States traded Russian terrorist arms dealer, Viktor Bout, left a U.S. Marine in Russian jail, and brought home a professional basketball player.
“How many people will Viktor Bout now kill [because] Biden set him free?” she added.
Griner was released on Thursday in a deal brokered by the notorious Saudi Crown Prince Mohammed bin Salman and United Arab Emirates President Sheikh Mohamed bin Zayed.
She had spent 10 months in Russian custody after being busted at the Moscow airport for carrying a cannabis vape canister.
As part of the prisoner swap, the Biden administration freed the so-called “Merchant of Death” Viktor Bout, a convicted international arms dealer and former Soviet military officer who had been serving a 25-year prison sentence in the US.