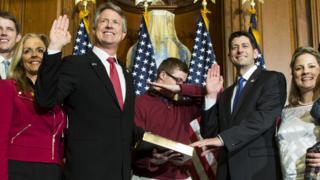 Finding your feet in a new job can be difficult at the best of times, so spare a thought for Republican US congressman Roger Marshall, whose son decided a photo op at his swearing in was the perfect time to do some dabbing.
As Marshall and family members posed with Paul Ryan, re-elected on Tuesday as House Speaker, the teen, Cal Marshall, can clearly be seen raising his arm into a distinctive dabbing pose.
Dabbing – a dance pose which involves burying your face in the crook of your elbow – gained momentum in 2015 when US musicians popularised the move.
Whilst his dad remains oblivious to his actions, Speaker Ryan is on to him.
“Do you want to put your hand down? ” he says to Cal, who sheepishly apologises and blames the unusual contortions of his arm on needing to sneeze, before smiling for the camera and adopting a more conventional pose.
The video has been widely shared on social media.
Despite his crash course in dabbing, Ryan still wasn’t entirely sure what had happened.
And what now for Cal after upstaging his dad on his big day? Well, according to the elder Marshall he may not be seeing much of his friends for a while.
Produced by Chris Bell, UGC and Social News team