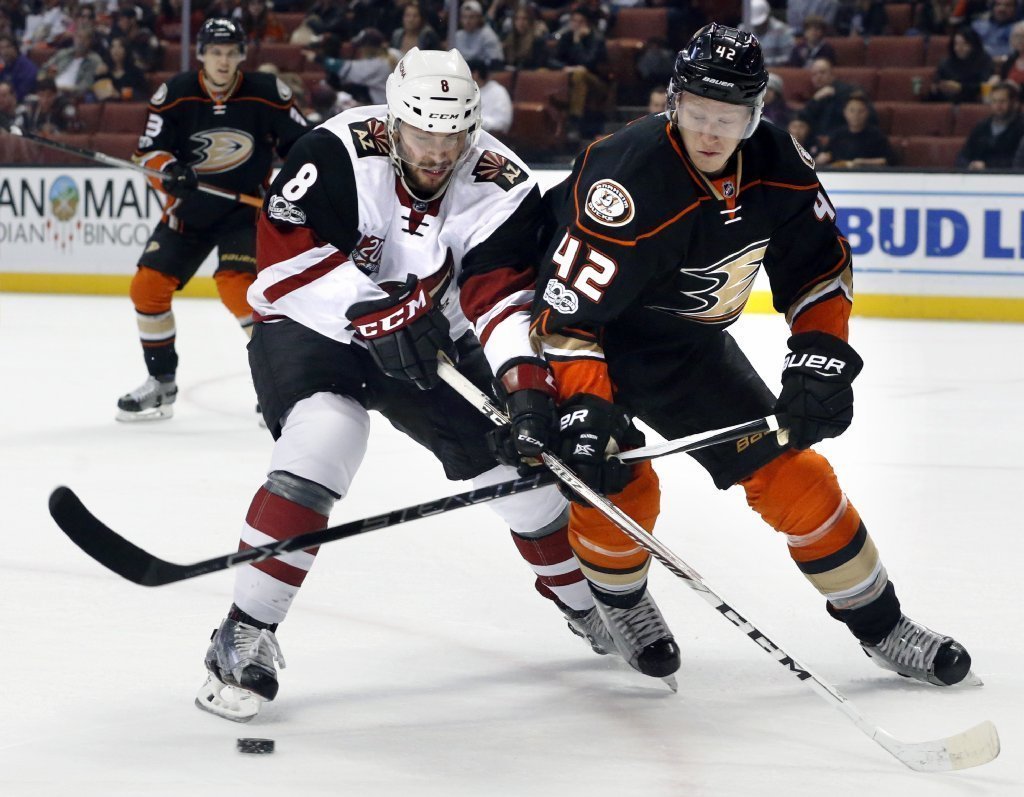 Overtime finally worked for the Ducks. It came on a baffling play by the opposing goaltender after Anaheim clawed for two points against one of the worst teams in the NHL that was missing three players in the final period.
The hockey gods saw to it that Ondrej Kase was the hero. Perhaps the Ducks’ most humble player scored with 35.6 seconds remaining in overtime to give the Ducks a 3-2 win against the Arizona Coyotes on Friday at Honda Center .
Kase whacked at a puck that Arizona goalie Mike Smith inexplicably held on to for several seconds and Kase converted it as Anaheim got its first overtime win this season.
“My stick broke and I didn’t get anything on it and it ends up in the back of the net,” Smith said of the goal. “I tried to do too much.”
“It’s amazing,” Kase said. “Every score is good. We needed this score.”
Kase, whose English is limited in media situations, usually lets his goal celebrations tell the story. His teammates surrounded him to share the joy. It was his fourth NHL goal and, by his account, his first overtime goal.
“He’s a funny kid,” Cam Fowler said. “He’s been working really hard. I can see the progression in his game, and how far he’s come. He’s been a big player for us. He scored some big goals. I was really happy for him tonight to get that one. It’s the first overtime winner, hopefully something he can remember.”
Anaheim appeared on its way to a win after Chris Wagner’s seeing-eye goal in the second period gave it a 2-1 lead, but the Coyotes tied it 3:12 into the third period and were in position to win it despite a rash of injuries.
The Coyotes lost forwards Martin Hanzal and Jordan Martinook and defenseman Jakob Chychrun, who took an elbow from Ducks wing Nick Ritchie in the third period.
Wagner wheeled around the right circle and threw the puck on net with Smith guarding the post. Wagner’s shot hit Smith’s pad and somehow found an opening to bounce into the net.
Factor in two goal posts that Arizona hit earlier and Anaheim seemed to have luck on its side.
But for most of the game, the Ducks found themselves in a deadlock with the Coyotes, who took a minus-42 goal differential, the second worst in the NHL, into the game. Arizona has been without forwards Max Domi, a noted Ducks killer, and Brad Richardson because of long-term injuries.
The Coyotes still have a top line with speed that tied it 1-1 off a rush 79 seconds into the second period. Hanzal went to the net and had Anthony Duclair’s pass redirect off his body and into the net. The goal ended goalie John Gibson’s shutout streak at more than 114 minutes.
The Coyotes might have taken a lead shortly after on a curious play when Ducks defenseman Brandon Montour appeared to throw his stick at Tobias Rieder to stop Rieder on a partial breakaway. Replays seemed to show that Montour did not touch the puck first before the stick left his hand. Rieder looked at the official — such a play usually results in a penalty shot — but no penalty was called.
Corey Perry ’s play has seen an uptick lately and he helped the Ducks get the game’s first goal. Rickard Rakell and Josh Manson set up Perry between the circles and Perry wristed a shot that went in off Joseph Cramarossa for Cramarossa’s third career goal.