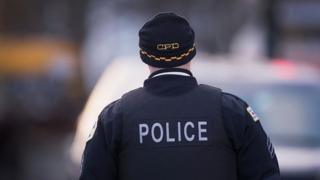 Four people have been arrested in the US city of Chicago over a video live-streamed on Facebook, in which a bound and gagged man was assaulted.
The man being assaulted has special needs, police say. His assailants can be heard making derogatory statements against white people and President-elect Donald Trump.
In one part of the video they use a knife to remove part of his scalp.
Chicago police have described the video as a “sickening” possible hate crime.
“It makes you wonder what would make individuals treat somebody like that,” Chicago Police Superintendent Eddie Johnson said in a press conference streamed on Twitter.
“I’ve been a cop for 28 years, and I’ve seen things that you shouldn’t see in a lifetime, but it still amazes me how you still see things that you just shouldn’t. ”
Police say the unnamed white victim is an acquaintance of one of the attackers and may have been kidnapped for up to 48 hours prior to the assault.
Life and death on the lost streets of Chicago
Violence in Chicago – in five shocking stats
Chicago killings: ‘We just want to be out of the hood’
Chicago ‘Hobo’ gang leaders convicted
They say he has been released from hospital after being traumatised by the attack.
In the press conference senior police officers paid tribute to the speedy response of officers in rescuing the stricken man.
In the video, the attackers can be seen cutting the victim’s clothes, dropping cigarette ash on him, pushing his head back with a foot and drawing blood by cutting off some of his hair with a knife.
Several people can be seen laughing and smoking as the attack takes place.
The incident happened on Tuesday, police say, in a flat on Chicago’s West Side.
Police say the victim was a high-risk missing person and two men and two women are now in custody.
In June a Chicago man was shot dead while live-streaming a video of himself on Facebook.