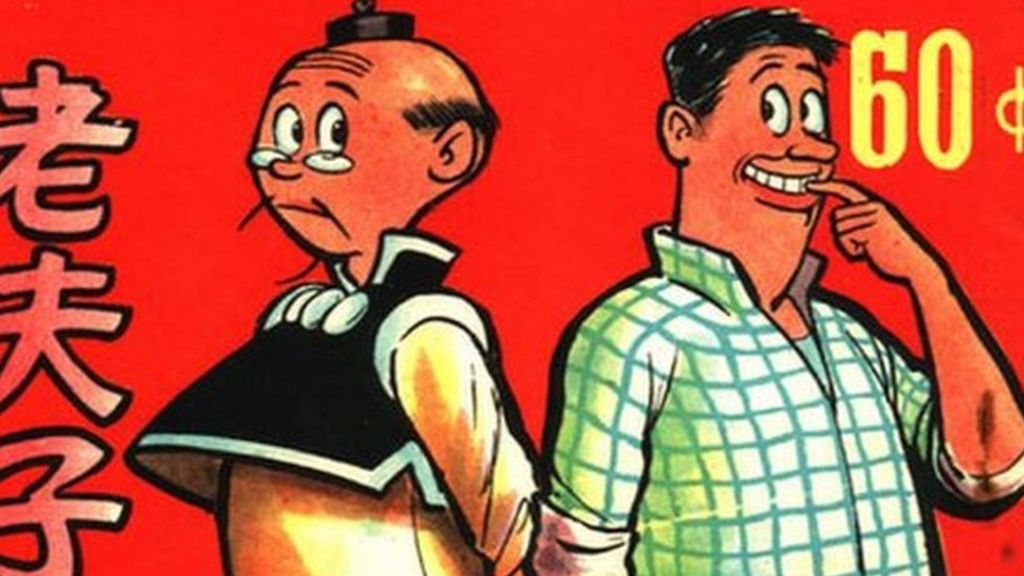 Wong was born in Tianjin, China in 1925. He launched his career in Hong Kong after moving there in 1956. Originally drawn as a means to support his family, his comic strips went on to become hugely influential among Chinese-speaking communities around the world.
His most iconic character, Old Master Q, first appeared in 1961. The cartoons were seen as faithfully chronicling the lives of the working class in Hong Kong in the 1960s and 1970s, when the economy was about to take off, and society was under the growing influence of Western culture.
Sometimes lazy and petty-minded, Old Master Q is a flawed character which resonated with readers in the Chinese-speaking world. His kind heart is one of his redeeming qualities. Most of Wong’s comic strips did not have any captions, but their humour touched the hearts of many.
Old Master Q – or Lao Fu Zi – has two best friends: Big Potato and Mr Chin, as well as a love interest, Ms Chan.
Old Master Q has not much luck in love as the beautiful, fashionable Miss Chan never seemed to return his affections. The female lead character was inspired by Wong’s wife, whose maiden name was Chan. But in real life the couple were happily married and raised three sons together.
Alfonso Wong’s pen name Wong Ze is actually the real name of his eldest son. Trained as an architect, Joseph Wong Ze – seen here – started to take over his father’s work in 1995. The two denied allegations that Wong plagiarised the character of Master Q from another Tianjin artist, Feng Pengdi.
Wong’s work has come to play a key role in Hong Kong popular culture. In 2012, during Hong Kong’s election for the chief executive, this photo parodying the three candidates – who all have an uncanny resemblance to the Old Master Q characters – went viral.
Old Master Q has morphed over the years into a sprawling franchise across South East Asia, with its own merchandise, themed restaurant and movies. New comic strips, reflecting more modern themes, are still being created by his son and read by children and adults.
Wong died of organ failure on 1 January in the US, at the age of 93. “My life is like a comic strip,” he once said. “I make Old Master Q, actually myself, do all the tricks to entertain the readers. “