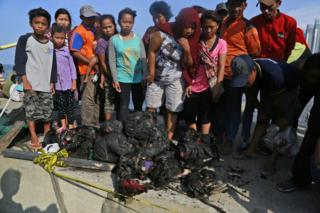 Police in Indonesia have arrested the captain of a ferry that burst into flames, leaving 23 people dead.
There are reports he was the first to leave the boat when the fire broke out, and was rescued from the sea.
A senior official at the country’s transport ministry has vowed to revoke the captain’s licence if the reports were found to be true.
Police are questioning him in connection with negligence. He has not been officially identified.
Nineteen people were still in hospital recovering from their injuries on Monday, officials say. Everyone who was on the boat has been accounted for.
The Zahro Express was carrying 230 people from Jakarta to Tidung island, a resort some 50km (30 miles) away.
Its manifest said it was only carrying 100 passengers.
A fire started when the ferry was about 1.5km (just under a mile) from its starting point. Passengers panicked and clamoured for life jackets.
The authorities blame an electrical fault for the blaze.
Tonny Budiono, a senior official at the transport ministry, was quoted by local media as saying: “If the captain jumped first then he is not a real captain.
“If it is true we will revoke his licence, he will not be allowed to sail any more. ”
Under the 1914 Safety of Life at Sea, captains have ultimate authority over their ships. It is also understood in the industry that captains will organise evacuation efforts – for which they will probably need to stay on board.
Reports suggested those on board were Indonesians heading to Tidung, which is part of the Thousand Islands chain, to celebrate the new year holiday.
Ferries are a key form of transport in Indonesia, which is made up of thousands of islands. But safety records are poor, with ferries often overcrowded and poorly maintained.