A statue of a girl representing the Korean women forced into sexual slavery by the Japanese military was unveiled in front of the Japanese Consulate in Busan, South Korea, last week. Japan recalled its envoy to South Korea on Friday to protest the statue. “The Japanese government finds this situation extremely regrettable,” Yoshihide Suga, chief cabinet secretary to Prime Minister Shinzo Abe, said during a news conference in Tokyo.
Japan also said it would suspend negotiations over a currency swap meant to help South Korea stabilize its currency, the won, in times of financial crisis. A spokesman for the South Korea Foreign Ministry called Japan’s announcement “regrettable.” The issue of the “comfort women,” as the former sex slaves were euphemistically called in Japan and South Korea, remains seemingly intractable, despite a 2015 agreement between the countries that was meant to put the dispute behind them. Surviving former sex slaves and their advocates installed the first in a series of comfort woman statues, in front of the Japanese Embassy in Seoul in 2011. It is still there, with Korean activists guarding it around the clock to ensure that it is not removed. Other dozens similar statues were installed since than in different locations. 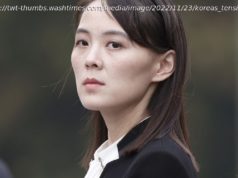