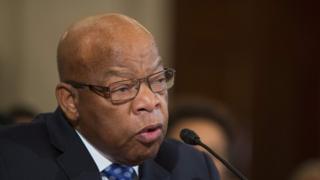 Politicians, entertainers and others have come to the defence of a US civil rights campaigner, Congressman John Lewis, who has become embroiled in a row with President-elect Donald Trump.
Mr Trump tweeted that Mr Lewis was “all talk” and should focus on his constituents, after he said Mr Trump was not a legitimate president.
But Mr Lewis’ supporters reacted with anger, saying he was a hero and icon.
Mr Lewis was a leading figure in the 1960s civil rights movement.
He is the last surviving speaker from the 1963 March on Washington, led by Martin Luther King.
Trump’s history on Twitter
Twitter combusts over Streep v Trump row
The tweets that say so much and reveal so little
The row came as civil rights activists led by Rev Al Sharpton began a week of protests ahead of Mr Trump’s inauguration on 20 January.
Several thousand protesters braved near-freezing temperatures to march to the Martin Luther King Jr Memorial in Washington DC, chanting “No justice, no peace”.
In a separate development on Saturday, African American Broadway star Jennifer Holliday pulled out of performing at the inauguration after pressure from followers, many of them from the LGBT community.
Holliday, who has sung for both Republican and Democrat presidents, apologised for her “lapse of judgement” and said she did not realise her participation would be seen as expressing support for Mr Trump.
Mr Lewis, a Democrat, said on Friday he would not attend the inauguration on the grounds that he did not see the Republican as a legitimate president.
“I think the Russians participated in helping this man get elected,” he told NBC’s Meet the Press. “And they helped destroy the candidacy of [Democrat] Hillary Clinton. ”
Mr Trump responded in tweets on Saturday : “Congressman John Lewis should spend more time on fixing and helping his district, which is in horrible shape and falling apart (not to mention crime-infested) rather than falsely complaining about the election results. All talk, talk – no action or results. Sad! ”
But Mr Lewis’ supporters were quick to rally round.
California Senator Kamala Harris, a Democrat, said it was wrong to treat him in this way.
“John Lewis is an icon of the Civil Rights Movement who is fearless in the pursuit of justice and equality,” she tweeted. “He deserves better than this. ”
Others mentioned Mr Lewis’ bravery and the fact that the exchange had taken place on the eve of Martin Luther King Day, on 16 January.
Many of them linked to photos of the two men, or to the 1965 so-called Bloody Sunday march in Alabama, in which Mr Lewis received a fractured skull as the protest was violently broken up by police.
Republican Senator Ben Sasse tweeted his support, saying Mr Lewis’ “talk” had changed the world. However, he said he disagreed with his decision to boycott the inauguration, adding: “It isn’t about a man. It is a celebration of peaceful transfer of power. “ 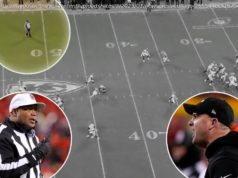 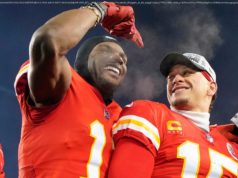 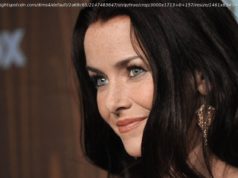