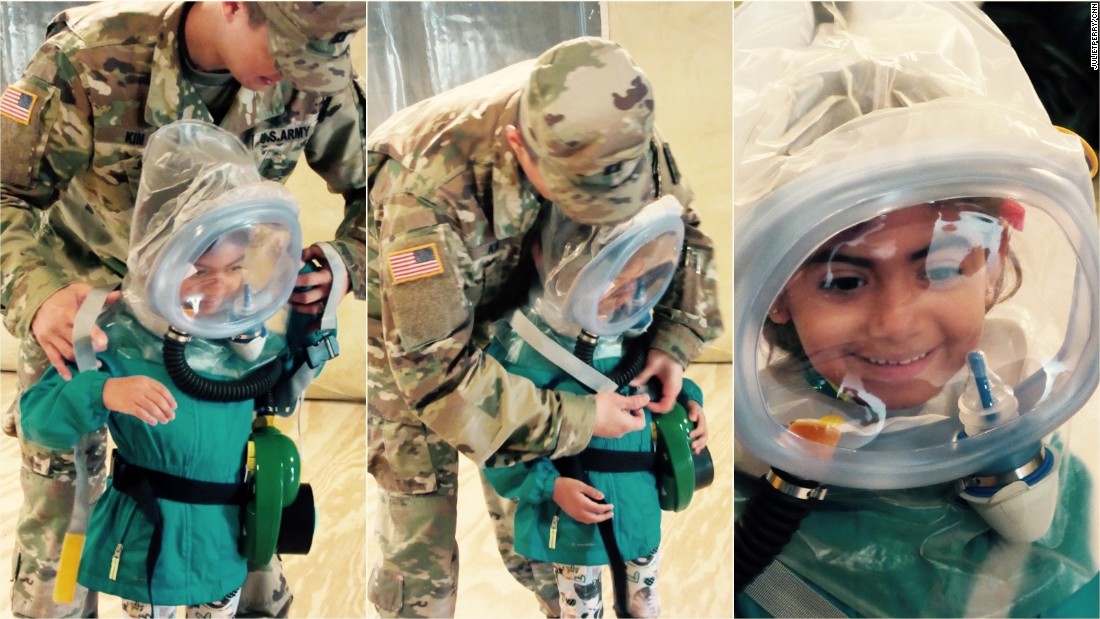 People are milling around calmly, clutching hot coffees, making small talk. Kids are chasing each other around an air hangar.
It’s hard to believe they are practicing a high-stakes emergency evacuation that simulates what would happen if North Korea invaded.
“In real life, everyone would be wearing masks, rushing through places,” says mom of two Nicholle Martinez. “There would be chaos everywhere. It would be scarier. ”
Nicholle met Nick Martinez when they were both stationed with the US military in Seoul. They’ve now been married for nine years and have two beautiful, energetic and charismatic children. Briannah, 6, is in first grade, and Alannah, 8, is in third.
In many respects they’re very typical. They go to church on Sundays and have lunch together afterward. They like to play sports — mom and dad want the girls to grow into healthy, strong young ladies.
Briannah wants to be a teacher, Alannah wants to be president.
But, because the whole family is now living on post in Seoul, the Martinez family lives with the ever-present danger of a very noisy and unpredictable neighbor — Kim Jong Un.
In the face of escalating tension, the Martinez women are practicing their path to safety.
In a military-led exercise, they traveled by bus, helicopter and military plane from South Korea all the way to the Pacific island of Okinawa, Japan.
In a CNN exclusive, we went along with them for the ride.
All those taking part in the drill are volunteers — relations of US soldiers stationed in Seoul. Unlike in a real scenario, they’ve had the opportunity to plan a little for this event.
There are a number of reasons why an order like this could be enacted, says Justin Sturn, a non-combatant evacuation planner. He uses the 2011 earthquake in Japan or the recent evacuation of non-combatants from Turkey as examples.
However, for all the claims this is a routine practice run, Kim’s threats loom over the exercise.
In September, North Korea said it had hit the button on its fifth and potentially most powerful nuclear test. International condemnation and aggressive sanctions have done little to impede the regime’s nuclear ambitions.
In a New Year’s address, Kim said that his country is close to testing an intercontinental ballistic missile.
“He’s said publicly that we’re the enemy,” says Sturn.
“With all the rhetoric that comes out of North Korea, of course we have to prepare for the worst case scenario. ”
Military families stationed in South Korea are encouraged to have a bag ready to go at all times. “I have a duffel bag that is always packed with sleeping bags and canned food,” says Nicholle.
According to Sturn, the decision to get soldiers’ families out of the country would come right from the top. A non-combatant evacuation order (NEO) is a political decision, not a military one.
“We would conduct the mission, but the execution is still a Department of State decision,” says Sturn.
The Army is trying to make the environment as realistic as possible.
Family members are permitted to bring along 60 pounds of personal stuff each. Military representatives urge the group to only bring the bare essentials.
I ask the Martinez family what went into their bags first.
“My cellphone! ” says Nicholle in a heartbeat.
“My blanket,” says 8-year old Alannah. She wraps her comfort around herself like a cape.
Briannah pauses, shyly. Mom and sister exclaim they know exactly what went into her rucksack first.