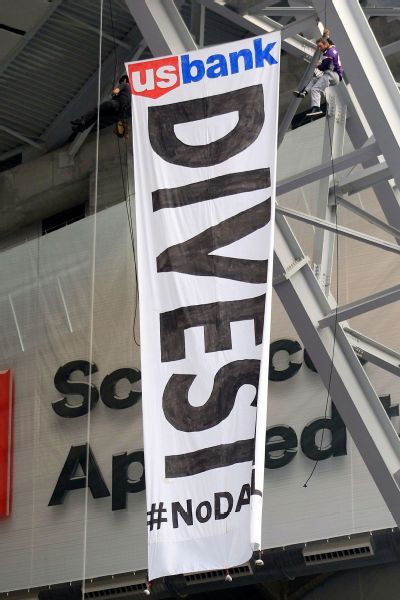 MINNEAPOLIS — Two protesters were charged with trespassing and burglary following the Minnesota Vikings – Chicago Bears game at U. S. Bank Stadium after they unfurled a banner from the stadium’s rafters protesting U. S. Bank’s involvement with the Dakota Access Pipeline.
Karl Mayo, 32, and Sen Holiday, 26, who had safety ropes and climbing gear, dangled from the rafters on the stadium’s east side throughout the Vikings’ 38-10 win .
Play was not interrupted, and Minneapolis police spokesman Corey Schmidt said a Hennepin County Medical Center doctor found both protesters to be medically sound after hanging from the rafters for most of the game. No one was harmed as a result of the incident, Schmidt said.
Mayo and Holiday were arrested and booked for misdemeanor trespass and burglary charges, police said in a statement. Both are being held without bail in the Hennepin County Jail.
A 27-year-old woman has also been accused of obstructing legal process. Police haven’t released details of her role in the incident.
The banner read “Divest #NoDAPL” with the U. S. Bank logo above. The two protesters were suspended in the air above Section 120 and one protester in a No. 4 Brett Favre Vikings jersey — Mayo — shimmied down the banner. Six rows of fans were cleared below the protesters.
Rescue workers used rappelling gear to navigate the truss above the stadium, where they eventually convinced the protesters to climb down a ladder connected to the truss. The protestors told police negotiators they wanted the media present as they descended from the rafters. They were not made available to reporters.
Mayo and Holiday climbed down to a round of boos from fans who remained in the stadium to see how the episode would play out.
Members of the media were sent a statement saying the action was a protest urging U. S. Bank (whose name is on the stadium) to withdraw a credit line from Energy Transfer Partners, the company that is responsible for the Dakota Access Pipeline. The project is an underground pipeline for oil that crosses through four states, but protesters argue that it could damage the environment and poison the water in neighboring areas.
Holiday, who was identified as one of the two climbers, said: “We are here in solidarity with water protectors from Standing Rock to urge U. S. Bank to divest from the Dakota Access Pipeline. ”
U. S. Bank had no comment.
A statement from SMG, which manages the stadium, said, “Two individuals appear to have climbed over a guardrail and across the ridge truss” to hang the banner. Schmidt referred questions to stadium security about how the protesters got a 40-by-10-foot banner and climbing gear into the stadium, which will host Super Bowl LII after the 2017 season.
The Associated Press contributed to this report. 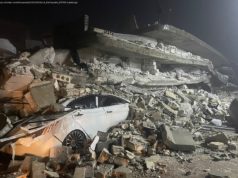 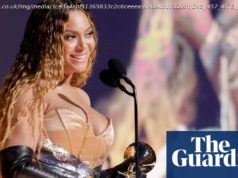 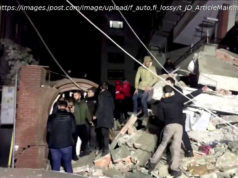