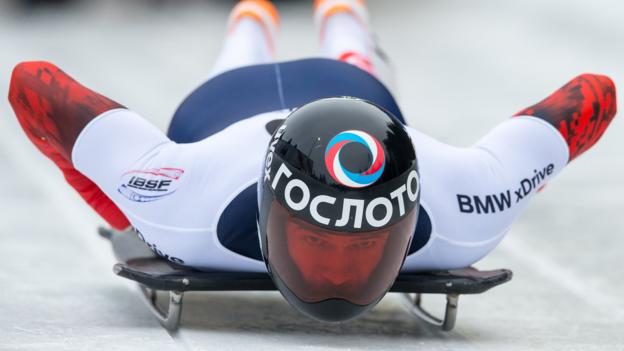 The International Bobsleigh and Skeleton Federation (IBSF) has lifted the provisional suspension of four Russian skeleton athletes, including Sochi gold medallist Alexander Tretiakov and bronze medallist Elena Nikitina.
The Russians were suspended following the second McLaren report which alleged “a state-sponsored doping programme” in the country.
The IBSF said there was currently insufficient evidence to continue with the provisional suspension.
Further investigations will be carried out by the International Olympic Committee (IOC) and IBSF into alleged doping.
The two 2014 Winter Olympic medallists, along with Maria Orlova and Olga Potylitsyna, will be free to compete at next month’s bobsleigh and skeleton World Championships in the German resort of Konigssee.
The championships were due to take place in the Russian city of Sochi, but it was stripped of its hosting rights by the IBSF in December, following the publication of the McLaren report.
Britain’s Lizzy Yarnold, who won gold in Sochi, is due to compete in Germany.
Redcar Junior parkrun
Walking Basketball