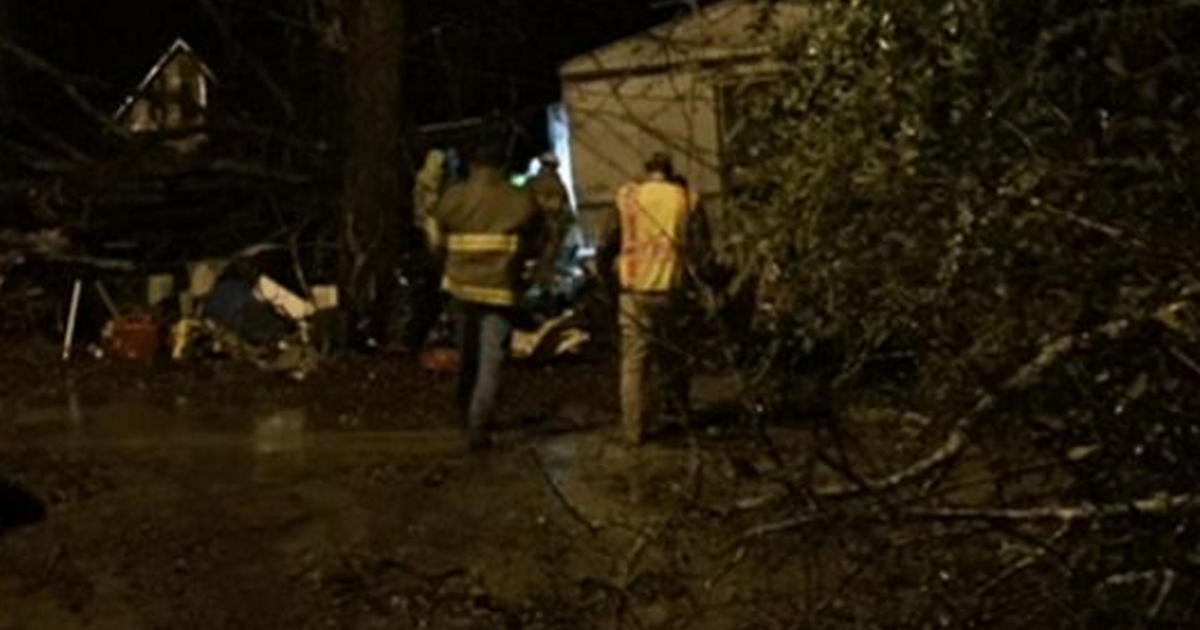 Parts of the South were bracing for more rain Tuesday, a day after severe storms killed at least four people in Alabama and one in Florida Monday.
The line of severe thunderstorms spawned several possible tornadoes, and the threat continued into early Tuesday for southern Alabama, southwest Georgia and the Florida Panhandle.
CBS Dothan, Alabama affiliate WTVY-TV reports , “Four people died Monday night when two trees toppled onto a house in southern Houston County during an apparent tornado. Three others in the home escaped without injury.”
The station quotes Houston County Emergency Management Director Chris Judah as sayhing, “It is a very dangerous scene. One of the trees cut the trailer in half.” He said those killed had huddled in one area of the mobile home while the other three were in another part.
Alabama Gov. Robert Bentley said in a statement on social media that the Houston County sheriff had told him about the deaths and he offered “prayers for those impacted.”
In Mossy Head, Florida, a 70-year-old man drowned Monday, apparently accidentally, the Walton County Sheriff’s Office says, adding that deputies found his car partially submerged “and his body floating face-down” near his trailer.
In Georgia, some of the heaviest rains were expected early Tuesday morning, forecasters said.
“There is a slight chance of damaging winds and tornadoes, however the highest probabilities are generally west of Interstate 75,” said Sid King, a meteorologist at the National Weather Service in Peachtree City, Georgia, near Atlanta.
Parts of south Georgia could see as much as 3 inches of total rainfall from all the storms produced by the system now moving across southern states, King said.
State emergency officials reported no injuries or deaths in Louisiana and Mississippi, but a trip to Walmart was memorable for some shoppers in Marksville, Louisiana, as severe weather blew out skylights in the store, sending water and glass cascading onto shoppers.
Marksville Fire Chief Jerry Bordelon said a fireworks stand in the Walmart parking lot was tossed 30 or 40 yards and mangled. The storm also knocked over 18-wheel truck trailers and punched holes in the Walmart’s roof. The fire department ordered shoppers to leave the store, but some didn’t want to leave even as managers closed it.
“Believe it or not, we had some people in there who were still trying to shop,” Bordelon said.
Walmart spokeswoman Erica Jones said the Arkansas-based company hopes to reopen the store Tuesday, but isn’t sure that will happen, citing needed repairs to a natural gas line.
Storms in central Mississippi near Mendenhall and Mount Olive were preliminarily identified as tornadoes by the National Weather Service, based in part on radar signatures. Both storms damaged farm buildings and homes. Other possible tornadoes will be surveyed later.
In Louisiana, there was also relatively serious damage in the southwestern parishes of Beauregard and Allen, including the town of Reeves. Some wind damage was also reported in Houston and throughout East Texas. Though Arkansas had also been included in warnings, there was only a stray report of hail in Jackson County in the northeast part of the state.
Tens of thousands lost power in Louisiana and Mississippi at the height of the storm, according to utilities.
Freddie Zeigler, a meteorologist in the Weather Service’s New Orleans office, said heavy winds were preceding the squall line, possibly contributing to power outages.
It was the second episode of heavy rain within days for some areas. An area stretching from Biloxi, Mississippi, through Alabama and across Macon and Augusta, Georgia, received more than 4 inches of rain Monday, according to radar estimates. Parts of southern Mississippi and southwest Alabama have received more than 8 inches of rain since Saturday. Though rivers along the Gulf Coast were rising rapidly Monday, only minor flooding was predicted.