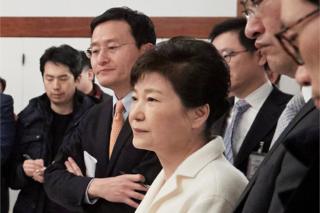 South Korea’s constitutional court has held a brief first hearing on Park Geun-hye’s impeachment, which the beleaguered president failed to attend.
The session was closed after nine minutes and postponed to Thursday because of Ms Park’s absence.
Lawmakers voted to impeach Ms Park last month over a corruption scandal.
Her close confidante Choi Soon-sil has been charged with abuse of power. Ms Park is alleged to have been involved as well, which she denies.
Ms Park’s impeachment case is being heard in a court by nine judges. They have 180 days to decide whether Ms Park, who has been suspended from duties, should go or stay.
Though the court has requested her presence, Ms Park’s lawyer has said she will not attend “unless there are special circumstances”, Yonhap news agency reported. If Ms Park fails to appear for a second time on Thursday, the hearing can proceed without her.
The justices will be assessing whether Ms Park abused her power, took part in bribery and violated the rule of law, among other issues, reported the Korea Times.
Ms Park met reporters on 1 January to strongly deny allegations from prosecutors that she was involved in Ms Choi’s dealings, calling them “distorted and false” suspicions.
Ms Choi is said to have used her close relationship with Ms Park to pressure companies into donating to two foundations which she controlled, and then siphoned off funds for her personal use.
The scandal has rocked South Korea, which has seen multiple mass protests calling for Ms Park to step down and apologise.
Ms Park has admitted giving Ms Choi inappropriate access to government decisions and has publically apologised for this several times.
Separately, South Korean authorities said on Tuesday they were proceeding with the extradition of Ms Choi’s daughter.
Chung Yoo-ra, a former national equestrian, was arrested in Denmark on Sunday for staying in the country illegally.
Part of the investigation into Ms Choi’s activities relates to a gift horse from Samsung to Ms Choi, allegedly for Ms Chung’s training.
Academics from the prestigious Ewha Women’s University in Seoul are also being investigated for admitting Ms Chung and allegedly giving her preferential treatment.