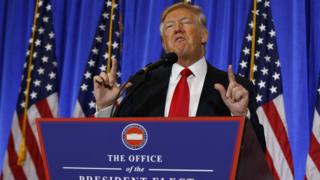 Donald Trump says the US spy chief called him to “denounce the false and fictitious” report that Russia held compromising information about the president-elect.
Mr Trump again tweeted that the report was “made up, phony facts”.
Director of National Intelligence James Clapper merely said he had told Mr Trump that no judgment had yet been made on its reliability.
Mr Clapper rejected Mr Trump’s claim that US intelligence leaked the report.
Mr Clapper’s statement on the conversation came out on Wednesday evening and he has not yet commented on Mr Trump’s version.
In his statement, the spymaster said he had “expressed profound dismay at the leaks that have been appearing in the press and we both agreed that they are extremely corrosive and damaging to our national security”.
Mr Clapper said he had also assured the president-elect the intelligence community “stands ready to serve his administration”.
Defending the decision to brief Mr Trump and President Barack Obama on the dossier, Mr Clapper said: “Part of our obligation is to ensure that policymakers are provided with the fullest possible picture of any matters that might affect national security. ”
He said: “We did not rely upon it in any way for our conclusions. ”
In his first news conference as president-elect on Wednesday, Mr Trump said it would be a “tremendous blot” on the reputation of US intelligence agencies if they had been responsible for the leak from the briefing.
“That’s something that Nazi Germany would have done,” he said.
On Thursday, German Foreign Minister Frank-Walter Steinmeier said he was “perplexed” by the comparison. “I can’t interpret that,” he said.
At Trump Tower in New York, a combative Mr Trump had told journalists the dossier’s claims were “fake news” and “crap”.
The 35-page dossier of allegations – which was circulating in political and media circles before November’s presidential election – was published in full on Buzzfeed on Tuesday evening.
The dossier claims Russia has damaging information about the president-elect’s business interests, and footage of him using prostitutes at the Ritz-Carlton hotel in Moscow.
Russia has strongly denied the allegations as “pulp fiction”.
The dossier – which is believed to have been commissioned initially by Republicans opposed to Mr Trump – was prepared by a former MI6 officer who now runs a London-based private consultancy.
Christopher Steele, who was formerly based in Moscow with the British foreign spy agency, is believed to have left his home this week and is now in hiding , the BBC understands.
The initial purpose of Wednesday’s news conference was for Mr Trump to answer questions about how he would distance himself from his family-owned property and licensing business.
Halfway through the event, a lawyer stepped up to the podium and announced the president-elect was handing over control of the Trump Organization to his adult sons and an executive.
New international business deals would be banned, but the company would be allowed to start new projects in the US, said the attorney.
The decision appears to contradict Mr Trump’s recent tweet that “no new deals” would be done while he was in office.
10 things we learnt from Trump press event
Trump press conference: Full transcript
The director of the US Office of Government Ethics said Donald Trump’s plan to avoid conflicts of interest does not match the standards of US presidents over the past 40 years.
Walter Shaub said the arrangement meant that Mr Trump would still see information about the businesses and deals being made in the newspapers and on television.
Although presidents are not subject to the same conflict of interest rules as other government employees, previous commanders-in-chief have placed their investments into a blind trust to prevent any question of corruption. 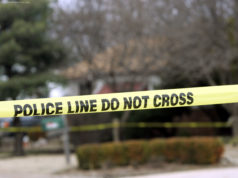 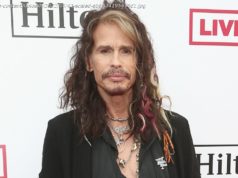 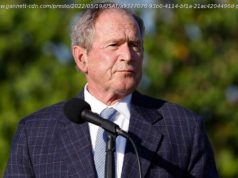