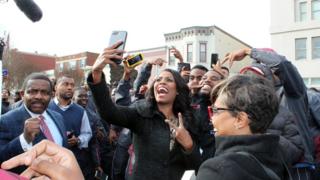 The only marching band from a historically black college to perform at the Trump presidential inauguration has experienced intense backlash. Regardless, on Thursday morning, the Talladega Marching Tornadoes blew into Washington.
When students awoke after the 19-hour bus trip from Talladega, Alabama, one of the first scenes that greeted their bleary eyes in the nation’s capital was Senator Bernie Sanders, waiting to cross the street.
It was a sight few of the Talladega College marching band members thought they’d ever see – a former presidential candidate strolling to work – as the vast majority had never even been outside the state of Alabama.
“They’re so talented, these young people. We’re really excited to give them this opportunity,” said Dr Sharon Whittaker-Davis, the school’s vice-president of student affairs, as she watched the students pour out of the buses and into the African American Civil War Museum in Washington. “We’re here. ”
The night before, the mayor of tiny Talladega and a crowd of about 100 well-wishers cheered as the buses pulled out of town. It was a loving send-off that contrasted sharply with the treatment the band had faced in previous weeks.
Several other high schools and colleges, including historically black institutions like Howard University, declined the invitation or didn’t even apply to play at Donald Trump’s inauguration.
As soon as it was announced that the Marching Tornadoes was the sole black college to accept, they were called sell-outs, race traitors and worse.
The college president received demands for his resignation, and then death threats. Alumni begged their alma mater not to go.
“Please do not march in this. Stand with people of colour against racism,” one comment read on the band’s Facebook page.
However, after college president Barry Hawkins appeared on Fox News to explain his decision to let the band perform, donations to a GoFundMe page raising money for the trip shot through the roof, soaring to almost $650,000 (£527,000).
The extra money will go towards scholarships, new band uniforms, new instruments and a new practice space – the college has only 700 students, almost all of whom receive some type of financial aid.
Many of the band members come from low-income backgrounds and are the first in their families to attend college.
The students were eager about the invitation and took the ensuing backlash personally.
“I just couldn’t understand why they would do that to us,” said 21-year-old alto saxophone player Eriel House.
“We’re students. We’re not involved in a political party. We just wanted to go show our talents. ”
“[He’s president] regardless,” said Shylexis Robinson. “I just want to march on Pennsylvania Avenue, period. ”
Once in Washington, the trip organisers had hoped to take the students straight to the Martin Luther King Memorial on the National Mall.
But because streets were already blocked off for the inauguration, they instead headed to the African American Civil War Museum – a tribute to the black soldiers who fought for the Union.
Talladega College itself was founded in 1867 by the descendants of slaves.
Inside the darkened museum, the students swished around in their matching blue-and-crimson tracksuits, peering into display cases of rusty slaves’ shackles, a yellowed 1862 copy of the New York Times announcing the “preliminary emancipation” of slaves, and a sign that reads: “We Serve Colored Carry Out Only”.
When Mr Hawkins announced to the group that a special guest awaited the students across the street, a student said: “Obama? ”
Instead, Omarosa Manigault – former Apprentice star, director of Mr Trump’s African-American outreach during the campaign, and now his director of communications – waited beside a statue of four black Union soldiers.
Students clamoured for selfies.
“You have shown and exhibited such great courage… we can’t move forward unless we are together,” Ms Manigault called out.
“On behalf of the president, Donald J Trump, I want to just thank you, welcome you here and I cannot wait to see y’all show up and show out tomorrow at the inauguration parade! ”
Milling around the memorial, Melissa Harris traced her hand along the names inscribed on the monument.
“I think I found one of my ancestors on one of these walls,” she said.
“I hope we get to meet President Obama,” another girl sighed.
“I don’t think it’s hitting us yet that he’s going,” said Marissa Melchor quietly.
“He’s not dying,” her friend said rolling her eyes.
“It feels unreal,” Ms Melchor replied. “But reality is going to hit us. ”
The students piled back onto the buses and took a long, slow ride through packed traffic to the University of the District of Columbia campus.
There the students got their first meal since the previous day, and listened to remarks from local business people who donated to their GoFundMe campaign.
None of the students who spoke to BBC News expressed a strong support for incoming President Trump, but they seemed cautiously optimistic.
“I don’t like everything about him. I think it’s going to be a pretty interesting couple of years,” said Bernard Norris, an 18-year-old trombone player.
“I just wish him the best of luck and I hope he does the country right… I hope something good comes out of this. ”
In the hallway outside the dining hall, 21-year-old first chair trumpeteer Marco Vera said that even though he is excited to perform, it was hard to hear some of the remarks Mr Trump made during the campaign. 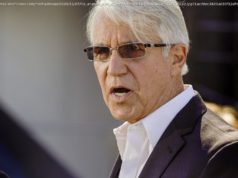 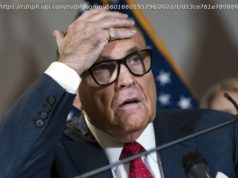 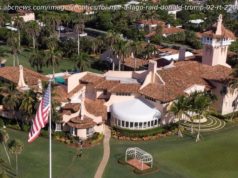