| Print | E-mail
Tuesday, 24 January 2017 11:36
Australian PM opens door to Beijing amid efforts to recast Trans-Pacific Partnership without the United States.
Australia and New Zealand have said they hope to salvage the Trans-Pacific Partnership (TPP) by encouraging China and other Asian countries to sign up, after President Donald Trump formally pulled the US out of the huge trade deal.
The agreement, the biggest trade deal in history, was signed in 2015 by 12 countries, which together account for 40 percent of the global economy.
Malcolm Turnbull, Australia’s prime minister, said on Tuesday his government was in “active discussions” with other signatories – including Japan, New Zealand and Singapore – on how to salvage the agreement.
“It is possible that US policy could change over time on this, as it has done on other trade deals,” Turnbull told reporters in Canberra, adding that the nominee for US Secretary of State Rex Tillerson and other Republicans supported the TPP.
“There is also the opportunity for the TPP to proceed without the United States,” he added. “Certainly there is the potential for China to join the TPP. ”
The agreement, which has not yet gone into effect, was seen as a counter to China’s rising economic influence.
Steven Ciobo, Australian trade minister, said Australia, Canada, Mexico and others had canvassed for a pact without the US at a World Trade Organisation ministerial meeting in Davos.
“There would be scope for China if we were able to reformulate it to be a TPP 12 minus one, for countries like Indonesia or China or indeed other countries to consider joining,” Ciobo told the Australian Broadcasting Corporation.
“This is very much a live option and we are pursuing it – it will be the focus of conversations for some time to come. ”
Bill English, New Zealand’s prime minister, expressed similar views, saying that China’s government “hasn’t been slow to spot the opportunity” to cast itself as a free trade supporter.
There was a willingness towards “making an effort to find out what we can do with TPP, rather than just dropping it and waiting and hoping to get a call [from Washington] about bilateral agreements sometime”, he told reporters in Wellington.
Trump declared on Monday he had “terminated” TPP in line with election pledges to cancel the “job killer” pact.
The US president said he would pursue bilateral deals with TPP signatories to secure terms more favourable to Washington.
But English said a US-New Zealand pact would be challenging, given Trump’s insistence that his government would dictate terms.
China has long been noncommittal on the idea of joining the TPP, choosing to back an alternative trade pact.
The Regional Comprehensive Economic Partnership (RCEP), a more modest deal, calls for lower and more limited regulatory standards.
It includes the 10 members of the Southeast Asian grouping ASEAN plus China, India, Japan, South Korea, Australia and New Zealand, but notably excludes the US.
At a regular press briefing on Tuesday, Chinese foreign ministry spokeswoman Hua Chunying remained coy about Beijing joining the TPP, simply noting that China supports “open, transparent, and win-win” trade pacts. 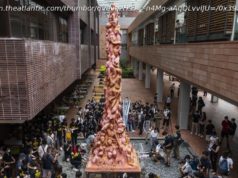 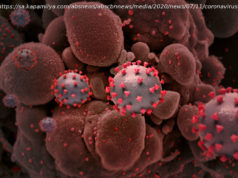 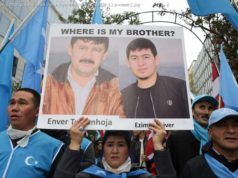 US varsities protest against Chinese genocide in Xinjiang