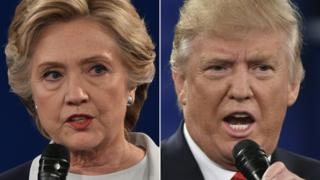 Who the Americans put in the White House makes a big difference to the world because US presidents have considerable power to shape foreign policy.
Think Lyndon Johnson and Vietnam; Richard Nixon and the opening to China; George Bushes Senior and Junior and their Iraq wars.
This election offers voters a real choice. Despite Donald Trump’s sometimes incoherent and seemingly improvisational approach to foreign policy, the two candidates do offer quite different visions. Hillary Clinton firmly believes the US role is to uphold a global security order from which it also benefits, the Pax Americana at the core of traditional US military and diplomatic thinking.
Donald Trump’s America First approach is more transactional. He frames alliances in business terms, vowing to get better value from them or pull back from historic commitments he says the US can no longer afford.
This is how their differences might play out in key international issues.
In no other area has Donald Trump departed more radically from decades of US foreign policy than his approach to traditional relationships. He has castigated Nato as outdated and obsolete and characterised its members as ungrateful allies who benefit from US largesse.
He says America can no longer afford to protect countries in Europe – and in Asia – without adequate compensation, suggesting he would withdraw American forces unless they pay up.
He’s also said Nato members like the Baltic states couldn’t count on the US to come to their military aid if attacked by Russia, unless they’d fulfilled their obligations.
Mr Trump is voicing longstanding criticisms. President Obama has also expressed frustration that most Nato members don’t meet their goal of spending at least 2% of GDP on defence.
But Mr Obama stands firmly by the military alliance. As does Mrs Clinton, who proclaims Nato one of the best investments America has ever made.
She’s said Mr Trump has made himself unfit for office by stepping away from Nato’s “ironclad” mutual defence commitments, and some in his own party have warned his approach could embolden Russia.
As Secretary of State Hillary Clinton was the architect of the “reset” aimed at greater co-operation with Russia, but she left office urging a harder line against President Vladimir Putin. That distrust carries over into her policy proposals to “stand up to Putin” and increase the costs of his actions.
While she acknowledges the US needs to work with Moscow where it can, she vows to partner with allies to limit its “aggression” in places like Ukraine and Syria.
She advocates strengthening Nato and improving the energy security of European states , and is willing to consider new sanctions.
In a reversal of traditional party roles, it’s the Republican Trump who has taken a more conciliatory tone to Moscow. But he’s gone further than any other presidential candidate ever, amidst charges that Russia is trying to disrupt the election by hacking Democratic Party emails.
That’s prompted allegations that his campaign has ties to the Kremlin. The real estate mogul has a history of business dealings with Russia and a number of advisers with Russian connections. The FBI, however, hasn’t found any direct links.
Mr Trump says said he believes he can ease tensions with Mr Putin, and has praised him as a strong leader with whom he would love to have a good relationship.
He’s said little about what this might involve beyond a desire for a joint fight against the Islamic State militants. But he intends to find out if the Russians would be “reasonable”, confident that he could better command Mr Putin’s respect than Mrs Clinton or President Obama.
Both candidates see so-called Islamic State as a global threat that must be defeated.
Hillary Clinton mostly adopts what President Obama is doing. Donald Trump talks tougher, vowing to “bomb the shit”out of IS and “take back the oil” from the group.