The US Navy is moving the USS Ronald Reagan aircraft carrier to the Korean Peninsula where it will conduct dual-carrier training exercises with the USS Carl Vinson amid heightened tensions in the region, two defense officials told CNN.
The move comes just days after North Korea demonstrated a significant leap forward in their missile program after launching a projectile that achieved “successful” controlled reentry into the earth’s lower atmosphere rather than falling back to the surface, according to a preliminary US intelligence analysis, two US officials tell CNN.
After completing a maintenance period and sea trials in Yokosuka, Japan, the USS Ronald Reagan departed for the Korean Peninsula on Tuesday, according to the Navy.
“Coming out of a long in-port maintenance period we have to ensure that Ronald Reagan and the remainder of the strike group are integrated properly as we move forward, ” Rear Adm. Charles Williams said in a press release.
Once it arrives in the region, the carrier will conduct a variety of training exercises but primarily focus on certifying its ability to safely launch and recover aircraft, the service said.
The 1,092-foot Reagan carries a crew of 4,539 and is equipped with roughly 60 aircraft, according to the Navy. It was commissioned in 2003 and cost about $8.5 billion.
The USS Carl Vinson arrived at the Korean Peninsula late last month as a show of force in advance of a long-anticipated sixth nuclear test from the North Korean government.
While Pyongyang has yet to carry out that nuclear test, it did launch a KN-17 missile that achieved an altitude of more than 1,000 miles on Sunday, according to the North Koreans, by far their longest reach yet in their missile test program.
Defense officials would not comment on how long the US plans to operate two carriers near North Korea, but ultimately the Reagan is expected to replace the Vinson in the region once its deployment ends.
Tensions have rapidly escalated in the highly volatile region since President Donald Trump declared in early April he would be prepared to act “unilaterally” against Pyongyang — and North Korea has engaged in a series of military drills and test launches.
While North Korean’s arsenal of missiles is becoming clearer, there is less certainty about how developed its nuclear program is.
To actually deliver such a missile, Pyongyang would have to have advanced technology in both miniaturizing its nuclear weapons as well as in protecting a nuclear warhead from being destroyed upon reentry into the earth’s atmosphere. 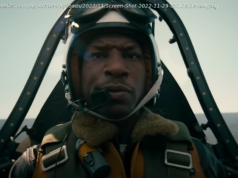