‘He left 75 per cent of his students out in the hallway to be slaughtered’
At least two students who survived the chaos and bloodshed of the Florida school shooting last month are challenging the narrative surrounding a teacher hailed as a hero after the rampage.
Maths teacher Jim Gard was credited with protecting students in his classroom in the horrifying moments of February 14 after a teen gunman unleashed a fusillade of bullets at Marjory Stoneman Douglas High School in Parkland.
In recent days, however, students Josh Gallagher and Connor Dietrich have expressed contempt at Gard on Twitter. Josh said Gard “called himself a hero, and… the media portrayed him as a hero when in reality he is the opposite.”
Josh said he was in Gard’s class when the fire alarm went off and the students filed out. When they heard gunshots, about 15 of them froze before racing back to the classroom. Gard, however, had locked the door and refused to let them in.
He is nothing but a coward. He has revictimised the students he left out of his class by calling himself a hero
“We were stuck in the hall for four total minutes, ducking and in fear for our lives” until a teacher Josh didn’t know let them in another classroom, Josh said. He said Gard “left 75 per cent of his students out in the hallway to be slaughtered.”
Gard gave a phone interview to CBS Miami while still holed up in his classroom with some of his students, less than two hours after the shooting spree. The group had been awaiting the all-clear from police officers conducting a classroom-by-classroom search.
Josh noted that Gard was interviewed by media multiple times and has been acclaimed a hero.
“He is nothing but a coward,” Josh said. “He has revictimised the students he left out of his class by calling himself a hero.”
“As one of the kids left in the hallway I want people to understand how terrifying and defenceless I personally felt,” Connor tweeted. “The person I had to rely on left us to die and that’s not okay.”
Gard expressed shock at the accusations, telling the South Florida Sun-Sentinel he followed protocol that requires to keep doors locked during an active gunman drill or real emergency. He said six students followed him back into the room.
“I looked back down the hall and no one was around – no one,” he said. “You have to close the door. That’s protocol. We have no choice.”
He said he and the six students were huddled in the dark when they heard banging on the door. He said he is prohibited from opening the door but did walk over to it. The banging, however, had stopped.
“Fast forward to Sunday, when the parents came back for an open house,” Gard told the Sun-Sentinel. “All of a sudden this kid comes over and starts screaming at me. Then his father started screaming at me. This is insane.” 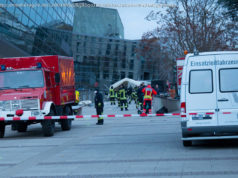 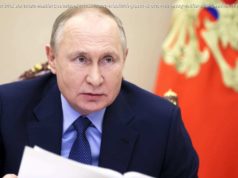 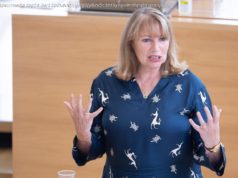