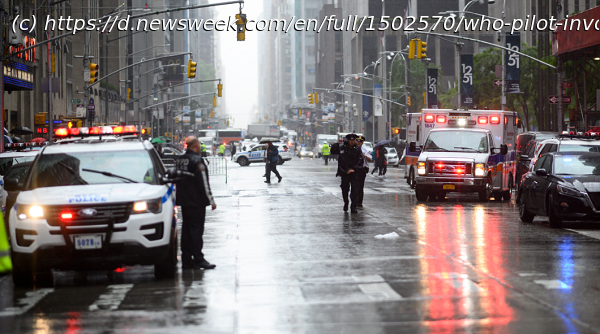 Police and emergency teams responded to calls regarding a crash landing on top of a 54-story office building in midtown Manhattan.
One person is dead after a helicopter made a hard-landing on top of a New York City building on Monday. The pilot was the only person in the aircraft, according to authorities, who confirmed the pilot’s death.
American Continental Properties, the company using the Agusta A109E helicopter at the time of the crash confirmed that the pilot is Tim McCormack, of Clinton Corners, New York, the Associated Press reported.
McCormack had flown for the company for five years and had obtained certification as a flight instructor in 2018. McCormack was certified to fly helicopters and single-engine airplanes in 2004, the AP said. He was a former volunteer fire chief for the East Clinton Fire Department, the AP said.
In a statement, Kathleen Bergen, a spokesperson for the Federal Aviation Administration the department’s “air traffic controllers did not handle the flight,” but noted the National Transportation Safety Board planned to investigate the incident and determine the cause of the crash.
The department confirmed the model of the helicopter was manufactured by Italian aerospace company, Leonardo, and are used for transportation, medical, security and utility.

David Ortiz returns to Boston for medical care after getting shot

NBA FINALS: Kevin Durant out for Game 5 as Warriors hope to beat Raptors