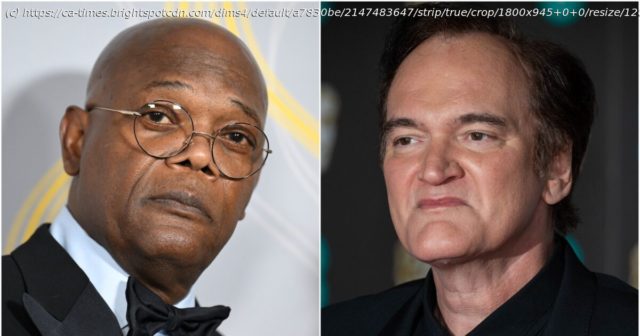 Samuel L. Jackson, star of several Quentin Tarantino and Marvel movies, disagrees with the director’s opinion that MCU actors are ‘not movie stars.’
In the latest installment of the never-ending “Are Marvel Movies Cinema?” debate — brought to you by Martin Scorsese, celebrity interviews and film Twitter — Samuel L. Jackson has challenged Quentin Tarantino‘s assessment that Marvel actors are “not movie stars.”
On Tuesday’s episode of “The View,” Jackson waded into the capital-D Discourse surrounding “the Marvelization of Hollywood” — as Tarantino put it while appearing on the “2 Bears, 1 Cave” podcast last week. It’s worth noting that the supporting-actor Oscar nominee has starred in several Marvel movies as Avengers recruiter Nick Fury, as well as various Tarantino films, including “Pulp Fiction” and “The Hateful Eight.”
“It takes an actor to be those particular [Marvel] characters,” Jackson told the panelists on “The View.” “And the sign of a movie star has always been what? A— in seats? What are we talking about?”
Jackson’s remarks came about a week after Tarantino argued on “2 Bears, 1 Cave” that Marvel actors aren’t so much movie stars in their own right as they are vessels for their more famous characters.