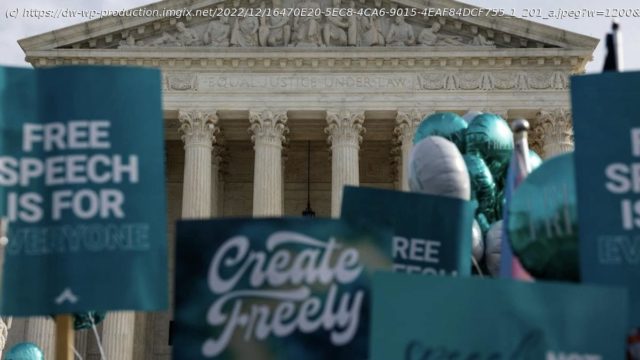 Array
In a Supreme Court case heard on Monday, conservative justices appeared to lean in favor of a Christian website designer, questioning how certain rules would apply in different scenarios.
The case is 303 Creative v. Elenis, which involves Lorie Smith, a web designer from Colorado who is a Christian. She is claiming that the Colorado Anti-Discrimination Act (CADA) violates her First Amendment freedom of speech and free exercise of religion rights. Smith has not started creating wedding websites over fear of breaking a law in Colorado that prohibits discrimination. She wants to post a message saying she won’t make websites for same-sex couples due to her religious beliefs. However, CADA makes it so that businesses cannot discriminate against certain individuals or say they are going to do so.
The justices heard arguments for the case at the Supreme Court on Monday and several of them asked questions about hypothetical situations when it comes to this issue.
“Let’s just say that [The New York Times] for Gay Pride Month decides that it’s going to run — to promote and recognize same sex marriage — only same sex marriage announcements, turns away heterosexual announcements, not because it disparages or disagrees with opposite-sex unions but because it’s trying to promote something else,” Justice Amy Coney Barrett said.
“Can it do that?” she asked Colorado Solicitor General Eric Olson.