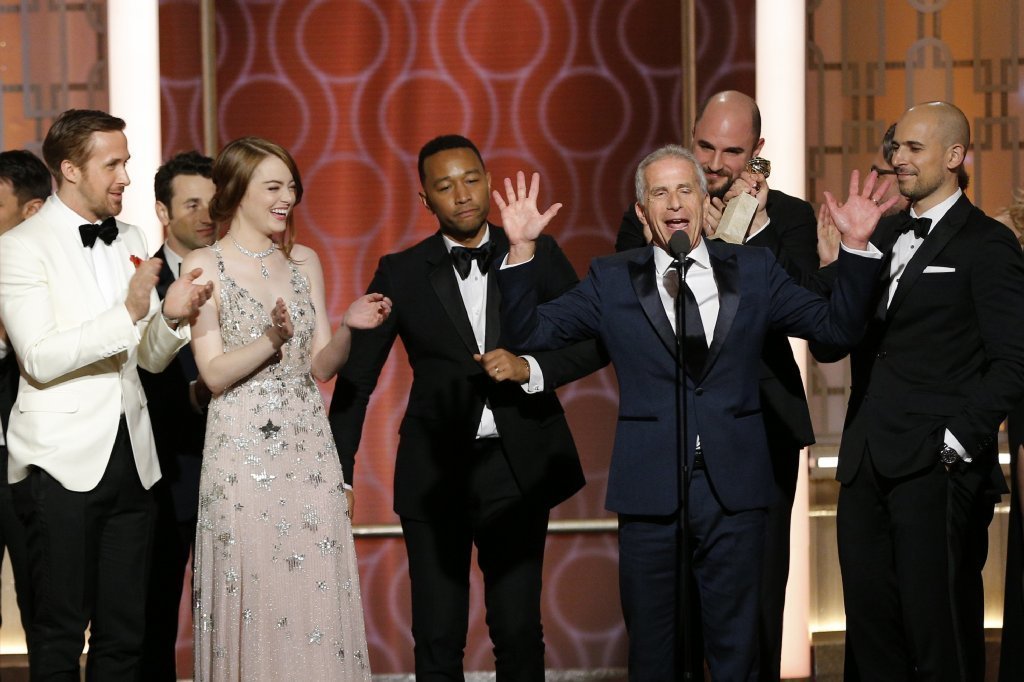 Is the Oscar best picture race over before the nominations have even been announced?
Damien Chazelle’s daring, magical musical “La La Land” swept its way through the Golden Globes on Sunday night, winning all seven of its nominated categories: best picture comedy/musical, lead acting honors for Emma Stone and Ryan Gosling , and awards for director, screenplay, song and score.
In doing so, it broke the record shared by two 1970s movies: “One Flew Over the Cuckoo’s Nest” and “Midnight Express,” both of which won six Globes, including one category — acting debut — that no longer exists.
“I’m in a daze now, officially,” Chazelle said accepting the director’s prize, the second of three trips he made to the stage. And who could blame him?
Now, naysayers could grouse and note that “La La Land” was off by its lonesome in the comedy/musical categories, separated from the other two awards season front-runners, “Manchester by the Sea” and “Moonlight. ” But “La La Land” prevailed in two key categories in which the three movies were directly competing, director and screenplay, proving two things: 1) The Hollywood Foreign Press Assn. loves musicals — always has and probably always will, and 2) this particular musical possesses a power and charm that has a way of burrowing into people’s hearts. (I’m humming “City of Stars” even as I write this.)
Host Jimmy Fallon opened the evening with a “La La Land”-inspired musical tribute of sorts that demonstrated just how deeply Chazelle’s musical has entered the pop culture consciousness — even before fully expanding into a theatrical wide release. Fallon sang numbers based on two songs from the movie — “Another Day of Sun” and “City of Stars” — and parodied the movie’s Griffith Observatory dream sequence, waltzing and floating with Justin Timberlake amid a backdrop of stars.
It doesn’t hurt, either, that “La La Land,” like recent best picture winners “The Artist,” “Birdman” and, to a point, “Argo,” celebrates the one thing that Hollywood and Oscar voters can’t resist: itself.
“Manchester by the Sea” — the movie Fallon called the “only thing more depressing than 2016” — did manage to win one Globe, lead actor Casey Affleck. But that meager showing does little to prop up a belief that Amazon Studios’ indie drama has what it takes to win the best picture Oscar.
“Moonlight,” Barry Jenkins’ drama depicting three periods in the life of a young black man struggling with and ultimately learning to accept his gay identity, took one Globe too — the evening’s last, best picture drama. Jenkins’ singular movie remains the strongest challenger to “La La Land,” as it has become part of the cultural conversation in a very different way, inspiring discussions about race, sexuality and identity in a manner that transcends stereotypes and conventions.
It’s easy to envision an Oscar split for picture and director, with Chazelle’s musical winning the former and Jenkins taking the latter.
One of the evening’s biggest surprises was saved (almost) for last when French acting legend Isabelle Huppert won the lead actress drama Globe for “Elle.” In the film, Huppert plays a woman who is raped and decides to shift the power from victim to avenger.
Huppert has won many critics group prizes, including honors from the New York Film Critics Circle and the Los Angeles Film Critics Assn. But she’s still not guaranteed an Oscar nomination when they are announced on Jan. 24. The lead actress category is particularly crowded this year, with strong turns from Stone, Natalie Portman (“Jackie”), Amy Adams (“Arrival”), Annette Bening (“20th Century Women”), Meryl Streep (“Florence Foster Jenkins”) and Ruth Negga (“Loving”).
But academy voters have shown a willingness in three of the last four years to look around the globe for their lead actress choices — Emmanuelle Riva in 2012 for Michael Haneke’s “Amour,” Marion Cotillard in 2014 for the Dardenne brothers’ “Two Days, One Night” and Charlotte Rampling last year for Andrew Haigh’s “45 Years.” Huppert could well continue the trend.
Elsewhere, Viola Davis won the supporting actress trophy for her work in Denzel Washington ’s adaptation of August Wilson’s Pulitzer Prize-winning play “Fences.” Davis has won supporting honors with countless critics groups in the last few weeks and will probably go on to win at the Screen Actors Guild Awards and the Oscars. She could have competed in the lead category — as she did when she performed the same role opposite Washington on Broadway — and still swept through the season.
Davis gave a moving speech, paying tribute to her blue-collar father, noting “he had a story and it deserved to be told — and August Wilson told it. ” Davis was also part of the evening’s true high point, introducing Meryl Streep for the honorary Cecil B. DeMille Award (“You make me feel like what I have in me, my body, my face, my age, is enough.”)
Eloquent speeches like the ones Davis delivered represent another kind of performance. And if done well and from the heart, they tend to stick in Oscar voters’ minds.
In that respect, the night’s biggest winner might have been Streep herself, though I’m sure her tenuous place in the lead actress Oscar race was the last thing on her mind when she crafted her fiery acceptance speech. It takes a lot to silence the Beverly Hilton’s ballroom, but celebrants stopped their schmoozing when Streep brought the hammer down on President-elect Donald Trump , decrying his “instinct to humiliate” and noting that “when the powerful use their position to bully, we all lose.”
Referring to the time Trump imitated disabled New York Times reporter Serge Kovaleski on the campaign trail, Streep noted it “was one performance this year that stunned me.” Taking that astonishment and turning it into righteous fury, Streep reminded everyone why she remains an awards season perennial. There’s no one like her.
Casey Affleck talks about the way Kenneth Lonergan uses everyday language to convey deep emotion in “Manchester by the Sea. ”
For her role as Jackie Kennedy, Natalie Portman says, “It’s not a fashion story,” but the clothes do tell a story. 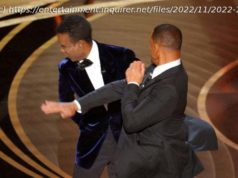 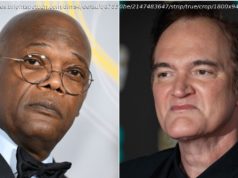 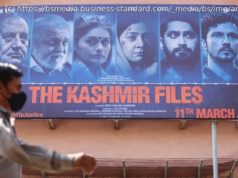