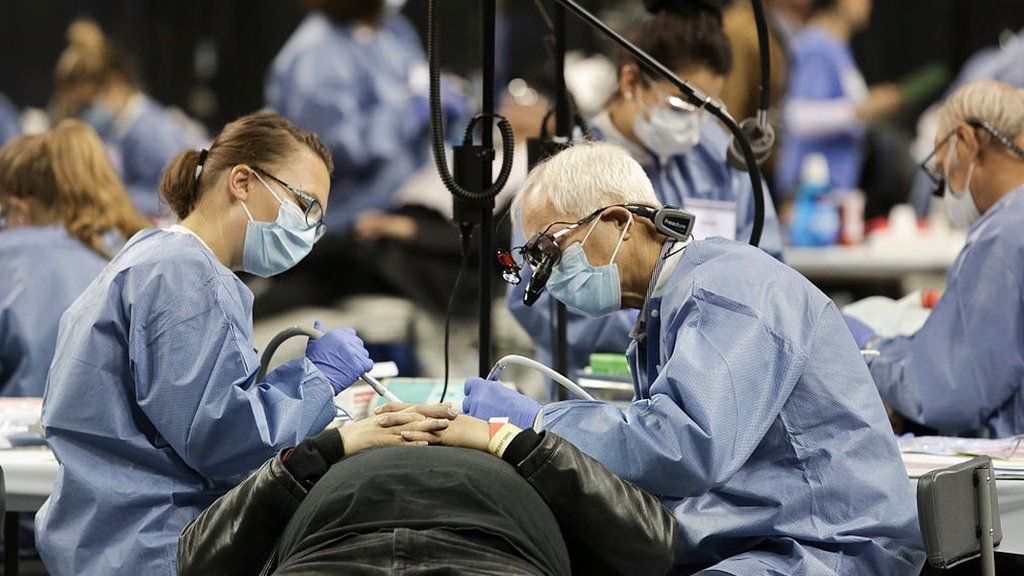 President Barack Obama has urged fellow Democrats to fight for his healthcare bill, as the incoming Trump team vowed to make a repeal of the law a priority.
In a two-hour private meeting Mr Obama sought to rally members of his party, as Republicans took their first steps to dismantle his signature bill.
Vice President-elect Mike Pence was also at Congress, where he told his party they would replace Obamacare.
The law has extended health coverage to an estimated 20 million Americans.
But the 2010 Affordable Care Act law has been hit by soaring premium costs and major insurers withdrawing from the scheme, leaving Americans with fewer choices for coverage.
After the outgoing president’s rare visit to Capitol Hill on Wednesday, Democratic Representative Elijah Cummings told reporters Mr Obama had „encouraged us to fight“ to protect his flagship domestic policy accomplishment.
Some of those present told US media the president had also urged them to „stay strong“ as Republicans prepare to take control of the White House and both chambers of Congress for the first time in a decade.
He spoke as Republicans in the Senate took the first step to begin demolishing Obamacare.
They voted by 51 to 48 to debate a budget resolution designed to starve the programme of funding.
President Obama is not prepared to give up on his healthcare reforms without a fight. His final visit to Congress is a reminder that in just 16 days‘ time, his fellow Democrats will hold very little political sway in this battle.
But publicly they’ve decided to talk tough. Congressman Gregory Meeks told me he knows Obamacare has its faults but it brings healthcare to millions who wouldn’t otherwise have it. That’s a key message Democrats are trying to publicise, but it is one they perhaps didn’t make clearly enough during the election campaign.
They also know Republicans have a weak spot. Repealing Obamacare will be the easy part – they have the votes they need and the backing of a president-elect who made it a key campaign pledge.
However, so far no Republican has come forward with a clear replacement plan. Congressman Bruce Westerman told me they don’t want to rip up and get rid of all of the reforms.
Democrats hope they can at least exploit this to delay any dismantling of the Affordable Care Act and in doing so preserve President Obama’s key legislative achievement.
Senate Democratic leader Chuck Schumer warned that scrapping the law would throw the insurance marketplace into turmoil and – in a play on Mr Trump’s campaign slogan – „Make America Sick Again“.
But Vice-President-elect Mike Pence, after meeting fellow Republicans on Capitol Hill, said they would bring about a „smooth transition to a market-based healthcare reform system“.
He said repealing and replacing Obamacare was „first order of business“ for President-elect Donald Trump and Congress.
House of Representatives Speaker Paul Ryan said Republicans – who have voted more than 50 times to try to repeal all or part of Obamacare – „have a plan“ and „plenty of ideas. “
But during two news conferences, Mr Ryan, Mr Pence and Senate Republican leader Mitch McConnell offered few details on their proposed replacement.
Read more
White House spokesman Josh Earnest said: „One of the most articulate Republicans on Capitol Hill is the speaker of the House.
„And he did a news conference today where he was unable to explain why Republicans have not put forward their replacement plan. “
Mr Trump – who will be sworn in as president on 20 January – wrote earlier on Twitter that Republicans „must be careful in that the Dems own the failed ObamaCare disaster“.
He predicted it would „fall of its own weight – be careful! “
The Obama administration said on Wednesday that 8.8 million Americans had enrolled in Obamacare for 2017, about 200,000 more than at the same time a year ago.
Mr Trump criticised the Affordable Care Act during his campaign, promising it would be replaced by something „much better and much less expensive“.
But after meeting President Obama in the days following his November victory, he vowed to keep some popular elements of the law in place.
Mr Trump said he liked the rule barring insurance companies from denying coverage to people with pre-existing medical conditions.