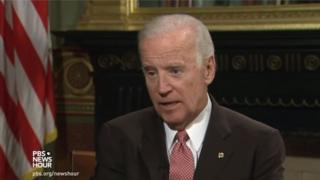 US Vice-President Joe Biden has told President-elect Donald Trump to „grow up“ and criticised his attacks on the intelligence community.
On Friday, Mr Trump will be briefed on allegations Russia meddled in November’s US presidential election.
But Mr Trump has cast doubt on claims of Russian involvement, and criticised the intelligence community in tweets.
Mr Biden said it was „absolutely mindless“ for the president-elect not to have faith in intelligence agencies.
„For a president not to have confidence in, not to be prepared to listen to, the myriad intelligence agencies, from defence intelligence to the CIA, is absolutely mindless,“ he said in an interview with the PBS network.
„The idea that you may know more than the intelligence community knows – it’s like saying I know more about physics than my professor. I didn’t read the book, I just know I know more. “
When asked what he thought of Mr Trump’s regular attacks on Twitter, Mr Biden said: „Grow up Donald, grow up, time to be an adult, you’re president. Time to do something. Show us what you have. “
He went on to call Mr Trump „a good man“.
Mr Biden said he had read a report by US intelligence agencies that outlined the extent of Russian involvement in the build-up to the US election.
Mr Trump is to be briefed on the report on Friday, and an unclassified version will be made public next week.
Mr Biden said the report clearly details „that the Russians did, as a matter of policy, attempt to affect and… discredit the US electoral process“.
He said the hacking was part of a systematic campaign to undermine Hillary Clinton, Mr Trump’s rival in the presidential race.
And he added that the hacking was far more widespread than had been suspected. Among those known to have been hacked were John Podesta, Mrs Clinton’s campaign manager, and the servers of the Democratic National Committee.
The documents were then published by the Wikileaks website.
On Thursday, the Director of National Intelligence, General James Clapper, told a hearing of the Senate Armed Services Committee that Russian President Vladimir Putin ordered the hack, and said the motive would be revealed next week.
Russia has denied involvement but the US has announced sanctions against Russian officials.
Mr Trump has repeatedly rejected allegations that the Russian government hacked into the computers of Mr Podesta or the servers of the Democratic National Committee.
On Wednesday, he repeated a suggestion that „a 14-year-old“ may have been responsible for the breach.
On Thursday, he said he was a „big fan“ of intelligence agencies, after months of casting doubt on the Russian link, but later went on to raise questions over how the Democratic Party responded to the security breach.
„How and why are they so sure about hacking if they never even requested an examination of the computer servers? What is going on? “ he asked in a tweet .
Last week, Mr Trump said he would announce information about hacking „on Tuesday or Wednesday“, but no announcement came.
Mr Trump’s inauguration will take place on 20 January.