A baggage handler was apparently locked in the cargo hold of an outbound Charlotte Douglas International flight Sunday and survived the ordeal as the plane reached altitudes of up to 27,000 feet, where outside temperatures can sink to minus 30 to 34 degrees.
Many questions remain about the incident.
United Airlines is still investigating what led to the baggage handler being in a cargo hold for nearly 90 minutes during the flight. The man was found after the aircraft landed at Washington Dulles International Airport, multiple media outlets reported.
The airline said in a statement that United Express flight No. 6060 was operated by Mesa Airlines, and it landed safely at Dulles on Sunday at about 4:16 p.m. Sunday. Once the plane was at the gate, an employee of the airline’s ground handling vendor was found in the cargo area, the airline said.
According to the Washington Post , United spokeswoman could not say Monday whether the plane’s cargo hold was temperature controlled or pressurized.
The plane was an Embraer 175 regional jet with 92 seats, online airline booking records indicate.
Radio communications traffic about the flight suggested the baggage loader was accidentally locked in the cargo area at the Charlotte airport, reported Observer news partner WBTV. The man reportedly refused to be checked out by medics.
Airport officials initially treated the discovery as a security breach, as it worked to identify the employee.
Media outlets have identified the employee as Reginald Gaskin.
Gaskin, 45, told the Washington Post, “I thank God. He was with me.” Gaskin told the Post that on advice of his attorney, he would not discuss what happened.
Gaskin is an employee of G2 Secure Staff, a United vendor based in Texas that supplies baggage handling services, airline officials told the Washington Post.
United officials could not immediately be reached for comment Tuesday.
At 27,000 feet, for comparison, that would be the equivalent of nearing the top of Mount Everest, which reaches 29,000 feet. 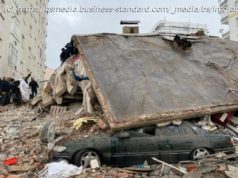