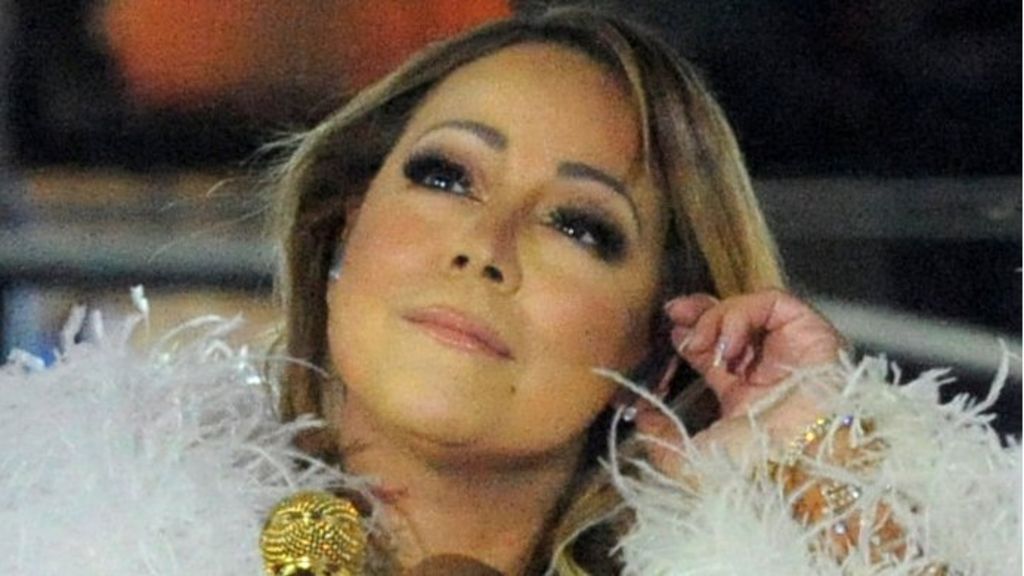 There have been bitter recriminations after Mariah Carey’s televised New Year’s Eve performance went wrong.
The pop star’s live appearance in New York’s Times Square was beset by problems as she complained of sound difficulties and struggled to sing.
Her representative told Billboard the producers «set her up to fail».
But Dick Clark Productions said any suggestion it would «compromise the success of any artist is defamatory, outrageous and frankly absurd».
Carey was live on ABC just before midnight and began with Auld Lang Syne, but hit trouble during her 1991 hit Emotions.
Complaining that she could not hear, she did not sing for much of the track and her dancers led her through an awkward stage routine.
She told the crowd: «I want a holiday, too. Can I not have one? I’m trying to be a good sport here. »
The problems continued during her next song, the 2005 hit We Belong Together. She lowered her microphone but could still be heard singing on a pre-recorded track.
«It just don’t get any better,» she said at the end of the song.
Her spokesperson Nicole Perna told Billboard: «She was not ‘winging’ this moment and took it very seriously. A shame that production set her up to fail. »
Carey told the production crew that her earpiece was not working in advance, Ms Perna said.
«They told her it would be fine once she was on stage,» she explained. «However, that was not the case and they were again told that her earpiece was not working. Instead of endeavouring to fix the issue so that Mariah could perform, they went live. »
Carey went on stage but was «flying blind», Ms Perna said. Referring to the backing vocal track, she said, «it is not uncommon for artists to sing to track during certain live performances».
She added: «Any allegations that she planned to lip sync are just adding insult to injury. »
However, production company Dick Clark Productions (DCP) said: «As the premier producer of live television events for nearly 50 years, we pride ourselves on our reputation and long-standing relationships with artists.
«To suggest that DCP, as producer of music shows including the American Music Awards, Billboard Music Awards, New Year’s Rockin’ Eve and Academy of Country Music Awards, would ever intentionally compromise the success of any artist is defamatory, outrageous and frankly absurd. »
It said technical errors could occur with live television in «very rare instances» but that an initial investigation indicated it had no involvement in the problems during Carey’s performance.
«We want to be clear that we have the utmost respect for Ms Carey as an artist and acknowledge her tremendous accomplishments in the industry,» it added.
Follow us on Facebook , on Twitter @BBCNewsEnts , or on Instagram at bbcnewsents. If you have a story suggestion email entertainment.news@bbc.co.uk .