Cardi B found out about her Grammy nomination in a less-than-ideal fashion.
Cardi B’s Grammy nomination announcement didn’t go as expected, prompting her to ask for “do-over” on Twitter. She tweeted “This is not How expected to find out I’m nominated for a Grammy,” along with a video of the exact moment, taken from a TV report about a completely unrelated moment.
The “ Money ” rapper found out about her nomination for Album Of The Year in a less-than-ideal fashion, as reporters gathered outside a New York courthouse where she was released without bail after being arraigned on charges of assault and reckless endangerment, which she received after allegedly sicking her crew on a pair of strip club bartenders suspected of sleeping with her husband Offset, whom she’s divorcing anyway.

Republic Records will no longer use the term ‘urban’ for music 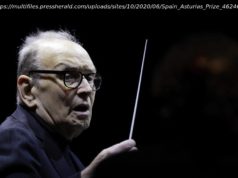 How Movies on TV Have Performed in Ratings During Coronavirus Shutdowns