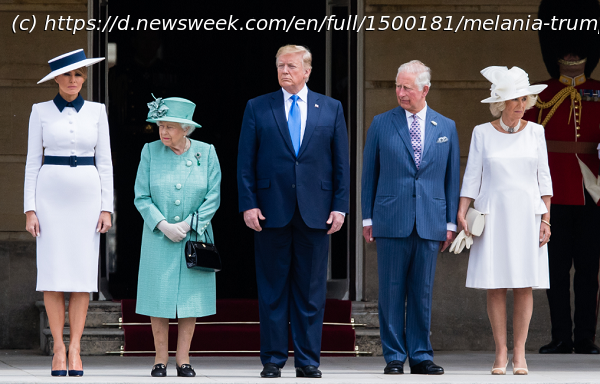 Melania Trump arrived at Buckingham Palace wearing a white ensemble with blue accents reminiscent of styles Princess Diana donned in the 1980s and 90s.
Melania Trump sparked comparisons to Princess Diana’s style from the moment she landed in the U. K. on Monday. The first lady is visiting the country for a three-day tour alongside her husband, President Donald Trump, and other members of the first family.
Melania Trump was seemingly paying homage to Great Britain before she even arrived in the country. She was spotted boarding Air Force One wearing a Gucci shirtdress covered in prints of landmarks like Big Ben and the Houses of Parliament. For her arrival at Stansted airport, Melania Trump switched up her look, donning a navy skirt suit paired with a blue, red and white sleeveless Gucci blouse featuring the first lady’s signature pussy-bow.

The Best and Worst of the Tony Awards 2019